Punching From The Shadows 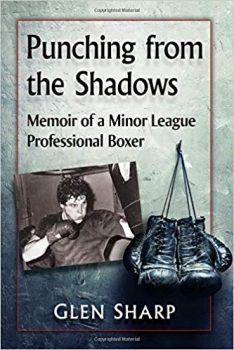 Glen Sharp had a professional boxing career that consisted of three fights of which he lost two. In Punching From The Shadows: Memoir Of A Minor League Professional Boxer he chronicles his time in the ring and the gyms, along with his experiences with the many different and unusual characters that populated the world of boxing in the 1980s. He also discusses why a young man decides to take up such a brutal sport, and the effect it had on his life, both short and long term.

Sharp has written a fast paced book that gives the reader much insight into what it takes to become a fighter. Unlike other sports from that era, when a young man would first enter a boxing gym it was very likely he would be training alongside seasoned professionals. This was true for the author, who would become friends with and a sparring partner for five time world title challenger Yaqui Lopez. I don’t think many young football players get a chance to workout with Tom Brady, but boxing was a very egalitarian sport. It was one of the things that made it so attractive.

Glen Sharp wasn’t some poor kid from the mean streets who sought out boxing as a means to escape a life of poverty. In fact, he explains how the belief that boxing is a poor man’s sport is overhyped. Dipping into the writings of Jose Ortega y Gasset as well as Homer, he describes boxing as a form of expression, an artistic pursuit. With the advances man has made, many skills that were once required for survival are no longer needed on a daily basis. However, there is still an urge in many a young man to test himself to see if he can pass the test when challenged on his ability to implement those qualities. These include strength, skill, courage, and endurance. Sharp found the best way for doing that was in taking up boxing.

In Punching Through The Shadows, Glen Sharp gives us an honest telling of his life in boxing. His self doubts and second guessing will be familiar to anyone who has taken a shot at practicing the sweet science. Along the way we meet people such as former Middleweight Champion Carl Bobo Olsen who trained Sharp for a period of time. Reading about the relationship between the former champ and the young prospect only strengthened my belief that having been a top ranked fighter does not necessarily mean you will be good at teaching the art of boxing. In fact, I came away from this book believing Glen Sharp gained more insight into what goes into making a boxer on his own than most trainers do. He really understands the “theory of boxing”.

In an interesting chapter entitled Boxing Is Economics Theory Expressed In The Flesh, Sharp, who has an undergraduate degree in economics puts that knowledge to use in explaining things like the cost/benefit calculation when throwing a punch. When a boxer throws a punch he is most vulnerable to being hit with one. How to mitigate that risk is something every fighter thinks of, though maybe not in economic theory terms. It makes for interesting reading.

When I say Sharp understands the “theory of boxing”, this is made very clear when he describes the styles of some of the leading boxers of the time. His analysis of Joe Frazier as not a slugger but as a skillfully aggressive boxer is both insightful and right on the mark. He also makes  great a point when he writes “What a fighter fears most is not physical discomfort…but rather a failure to live up to the image the fighter has of himself.” There are a number of such gems in this book.

Along with many insights into the world of boxing, Sharp also delivers a compelling personal story. His comparison of boxing with art  serves him well when discussing his own journey. His story is honest and open. He freely discusses his fears, his self doubts, and his disappointment in not being able to become a top boxer. Boxing is a sport of dreams that are rarely fulfilled. Glen Sharp, like just about any kid who ever put on a pair of boxing gloves, dreamed of one day becoming a world champion. As far a long shot as that is in reality, it is still painful to have to accept the fact that it just isn’t going to happen. In boxing, the default mode emotionally is to look upon one’s self as a failure in so many ways, most of all in believing it means you have failed the test of manhood.

It took Sharp some time to work his way through those feelings. After his third pro fight he stepped back from boxing. A while later he decided he wanted to give it another try. He still felt he could do it and the need to prove himself still burned inside of him. After speaking to a trainer and promoter about making a comeback, he was advised not to. It was a tough message to get and it hurt. He again uses the comparison with the arts to describe his feelings and how he dealt with this emotionally. It turns out he proved himself solidly.

When visiting a boxing gym today, the odds are you will see something more akin to a huge aerobics class setting than the boxing gyms from a few years back. Boxing gyms are now a platform for group exercise rather than places to learn the expressive art Sharp so well describes. He was around for the waning days of the old school boxing gyms and trainers who understood what it was all about. Punching Through The Shadows is a terrific chronicle of what boxing was and should be. It is also a great story of a young man’s quest to test himself and to deal with the emotional turmoil that is so much a passage into manhood.

If you spent time in a boxing gym before they became group fitness centers you will find much of what Sharp has written will bring back memories. If you missed out on those days, you will learn much about what it meant to train in an authentic boxing gym at a time when it was very different than today.

I can’t think of another boxing book out there that gives such an inside look at what it was like to pursue the dream of boxing in the way Glen Sharp did. It is a great read on so many levels. Most of all, it is a very human story. I doubt there are many who will not be able to relate to some portions of Sharp’s book. I know I did.