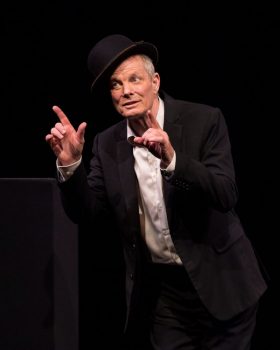 ArtsEmerson, Boston’s leading presenter of contemporary world theater and film and the professional presenting and producing organization of Emerson College, is excited to welcome Tony Award-winning actor and master clown Bill Irwin to Boston for his solo stage piece On Beckett which will run six performances only from October 26 – 30, 2022 at the Emerson Paramount Center Robert J. Orchard Stage. In On Beckett, Irwin explores a performer’s relationship to the works of legendary playwright Samuel Beckett—widely regarded as one of the greatest dramatists of the 20th century— incorporating passages from various works by the Irish writer, including Texts for Nothing, The Unnamable, Watt and Waiting for Godot. On Beckett is produced by Octopus Theatricals and premiered at Irish Repertory Theatre in New York City on October 3, 2018. 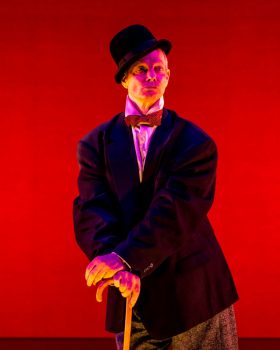 Irwin’s physical approach to the comic and tragic sides of Beckett’s writing invites audiences to experience the writer’s language as they never have before in this fun, surprising trek through the works of Beckett. Bill Irwin’s original stage works include The Regard of Flight, The Happiness Lecture, and Old Hats. He won Broadway’s Best Actor Tony Award for Who’s Afraid of Virginia Woolf, and picked up a second statue for Fool Moon (created with David Shiner) which earned four Tony nominations. His many television credits include Elmo’s World (as Mr. Noodle) and Legion (Mr. Loudermilk), and his film credits range from Rachel Getting Married to The Grinch Who Stole Christmas.“On Beckett is an invite — it’s a personal invitation — to deep dive into the writing of a man whose work I love AND hate — Mr. Samuel Beckett,” explains Bill Irwin. “I think On Beckett is a good first entry to the wild and beautiful content that is Mr. Beckett’s writing — and it speaks also to those of us who read and re-visit the language often. It’s an actor’s — and it’s a clown’s — look at a great writer’s language. I look forward to bringing my take on Mr. Beckett’s writing to Boston.”